The New York Times has regularly included my commentary and columns on infertility, IVF, and its collateral damage. Our collaboration began with a feature story on me and this blog in June 2008. It ran in the print edition, and for a time, on the home page of The New York Times

This groundbreaking feature opened up a new understanding about infertility, identity issues, and the lasting emotional challenges associated with failed IVF.

This column was another first. Rather than do the easy thing, the editor took a contrarian view and gave me the opportunity to write what it feels like to be a ‘Non-Mom’ on Mother’s Day. I’ll always be grateful to Lisa Belkin at The New York Times for greenlighting my writing, which offered a different take on Mother’s Day. 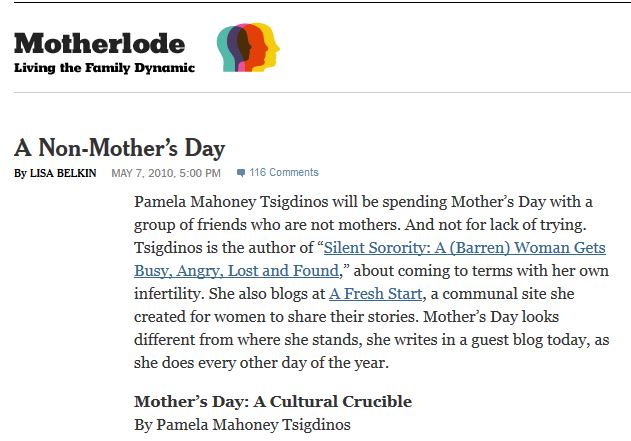 Articles written about reproductive medicine routinely characterize assisted reproductive technologies (I.U.I, I.V.F., donor eggs, egg freezing and surrogacy) as a ‘sure thing’ when, it turns out, close to 80 percent of the cycles performed annually around the world fail. It took some digging (since clinics are reluctant if not downright misleading about success rates), but the facts are spelled out on the European Society for Human Reproduction and Embryology website.

The distorted reality that fertility medicine equals ‘successful science’ is what led me and author Miriam Zoll to team up on a piece to set the record straight and rein in the hype. We submitted a letter and and an op-ed to The New York Times entreating the editors to provide a public service by adding new voices to the often one-dimensional conversations. Our piece can be found here: Selling the Fantasy of Fertility

In 2019, I teamed up with international academic researchers and health advocates to study how the IVF industry knowingly turns women into lab experiments without their full understanding and consent. IVF add-ons are the dirty little secret in the ‘fertility’ industry. These interventions are the latest in a long history of the industry experimenting on women. 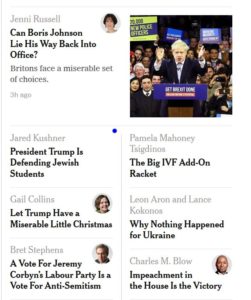 s I moved from IVF patient to patient advocate I’ve had the opportunity to monitor the industry from a unique perspective. My latest op-ed ran December 12, 2019 in The New York Times. The editors didn’t pull any punches with the headline they wrote: The Big IVF Add-on Racket. The piece landed on the homepage alongside major news around the world. Its placement signals this is not a topic to be taken lightly. It also ran December 13 in the print edition.

The op-ed reveals the unethical way the industry develops and sells add-ons to patients seeking help to become pregnant. But, this op-ed was not the only piece making waves. It followed several new research papers published the same month in Fertility and Sterility. The journal included one I co-authored as part of an international team of researchers, academics and patient advocates. Our article, Do à la carte menus serve infertility patients? The ethics and regulation of in vitro fertility add-ons, raises many tough questions